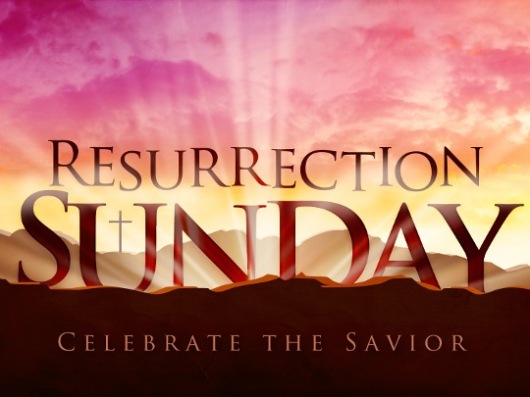 “Mary stood weeping outside the tomb” (John 20:11), writes John, weeping, we presume, not only because they had crucified Jesus, not only because she is grieving his death, but weeping because someone has stolen his body. Or so she thinks. “They have taken away my Lord, and I do not know where they have laid him” (John 20:13).  We can only imagine Mary’s grief. Those who have lost a loved one know what she is feeling.  And that’s why what happens next makes Easter all the more a day of miracle and wonder

Suddenly, Mary comes face to face with the Risen Messiah.  But she doesn’t recognize him she thinks he is the gardener until he calls her by name. Hearing his voice her tears of sadness are transformed into tears of Gladness.  You might imagine that she want to charge at him to hug him. But he says do not touch me.   Barbara Brown Taylor, the eloquent Episcopal priest, points out that the scripture never says that “Mary reached out and tried to hold Jesus. His comment, she writes, was a peculiar thing to say, unless …Unless it was what she called him – my Teacher – the old name she used to call him … but that was his Friday name and here it was Sunday – an entirely new day in an entirely new life.”[i]

Was Jesus saying, “Don’t touch me because you must forget the former things and behold all things are new!”  I AM the Risen Savior who calls you to follow me into a brand new way of living!  Mary suddenly no longer cries with sadness, she weeps for joy!  She no longs sees her dead teacher she helped bury on Friday.  She sees Jesus the Christ alive Easter Sunday!   What a miracle and wonder!

The old has passed away behold the new!  See that Good Friday  Roman Cross that provoked cries of terror, grief and fear, Behold it will be forever  a symbol of faith, hope and love provoking tears of gladness and delight!

This past week the Boston Marathon has again taken center stage globally.  We may not have taken notice but it will take place tomorrow, the day after Easter.  An estimated 2,000,000 people are will be in attendance. All are coming for more than just a race, they are seeking to reclaim, take back, find redemption from last year’s bloodbath.

Our Boston Marathon experience offers us a modern-day version of  the resurrection story  As with every resurrection, this is not restoration of the old, but new life born out of the experience of death. Lives are still lost, limbs are still missing, hospital and rehab bills still pile up — and yet people have worked their way toward resurrection hope. Resurrection good news is never a solitary pursuit.  In story after story from Boston, the community of survivors holds each other up. Good news comes to people whose lives are now woven together by the work of making sure good is born out of evil.  This kind of resurrection happens not in the absence of death, but includes it, encompasses it, embraces it, and then transforms it, by an effort of heart and will.[ii]

The First Easter begins with Mary crying out of grief and sadness.  Not long after, tears of gladness and joy flow as the Risen Christ calls her by name and invites her to let go of the past and arise and follow him into a whole new day and a whole new life. He continues to call us by name inviting us to let go of the past, let it die so that we can experience the miracle and wonder of Easter in our lives Today!  Amen! 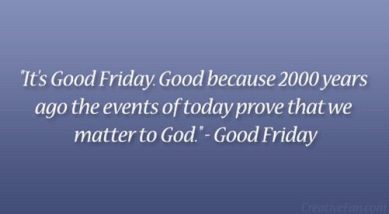 The word enmity means: the state of feeling or being actively opposed or hostile to someone or something. The writer and surgeon Bernie Siegel tells the story of Wild Bill, an inmate of a concentration camp, who after six years of serving the enemy as an interpreter, was still full of energy and physical health and a gentle positive spirit. To the other prisoners, he was a beacon of hope, an agent of reconciliation, one who was constantly urging them to forgive each other and the enemy. This man’s positive spirit was all the more amazing because of the horror which he himself had experienced at the beginning of the war – watching his own family: his wife, his two daughters, his three little boys, shot before his very eyes by Nazi soldiers in Warsaw.  When asked to explain his lack of bitterness, Wild Bill responded, “I had to decide right then whether to let myself hate the soldiers who had done this. It was an easy decision, really. I was a lawyer. In my practice I had seen too often what hate could do to people’s minds and bodies. Hate had just killed the six people who matter most to me in the world. I decided then that I would spend the rest of my life – whether it was a few days or many years – loving every person I came in contact with.”1 Wild Bill refused to sacrifice Love in exchange for enmity.

Enmity was the driving force that led Jesus through betrayal, abandonment, mockery beating, scourging, crowned with thorns, a torture walk and nailed to the cross.  Jesus never knew enmity even after all he suffered we are told ] he spoke these words to all who accused him, tortured him, and abandoned him saying, “Father forgive them they know not what they do.” He sacrificed his life but could not deny himself sacrificing Love. This is why we call the day of Christ’s death good.  For God so loved the world that he gave his only son that who so ever believes shall have eternal life. John 3:16

Isaiah prophesied in chapter 53:5 saying, “he was pierced for our transgressions he was crushed for our iniquities; the punishment that brought us peace was on him, and by his wounds we are healed.”  On this day we remember; the last supper, the betrayal, the arrest, the mockery, the crown of thorns, the scourging, the long walk to Golgotha. Regularly we remember the broken bread representing His broken body; the cup of blessing representing His blood sealing the eternal covenant.  We call it communion remembering Jesus’ passion for us. His love for us compelled him to laid down his life for  you and I: to save, to resuscitate, to resurrect, to make a way by faith through grace once for all.   So we could all discover our belonging within ourselves and realize our belonging to God and others. Given a second chance to re-emerge new people with a new way of living.  What help us understand such a great love?

Communion is an important part of my spiritual life.   This may be because of my Catholic upbringing as Communion was the centerpiece of each Mass.  However, I had an experience of personal significance that took place one hot summer night in the little Baptist Church. The preacher had been preaching on the Blood of Jesus.  It was a powerful message. He said, “If you were the only person on the face of the earth, Christ would have died just for you.” The preacher finished the sermon and we sang a  hymn while the communion service commenced.  “What can wash away my sin…nothing but the blood of Jesus…What can make me whole again…? Nothing but the blood of Jesus… Oh! Precious is the flow that makes me white as snow… No other fount I know…Nothing but the blood of Jesus.  As I was holding the grape juice, my emotions got the best of me and a tear fell into the cup.  The reality of my tears mingled with the sacramental element helped me experience Christ in that present moment.  Over the years, this experience has held me when I doubted God’s love for me. Communion has never been the same.   I encourage you to find a Christian community this Easter. Go expecting.  Whenever two or three or more gather Jesus said in the midst of them I AM.   Communion with others and God opens us up to the reality of our belonging!

CS Lewis said, “Good things as well as bad, you know, are caught by a kind of infection.  If you want to get warm you must stand near the fire:   if you want to be wet you must get into the water.  If you want joy, power, peace, eternal life, you must get close to, or even into the thing that has them.  They are a great fountain of energy and beauty spurting up at the very center of reality.  If you are close to it, the spray will wet you: if you are not, you will remain dry”.    What do you do to nurture your faith? How do you measure the strength of your relationship to God?   To know and be known by God sums up all that Jesus models for us. He clearly tells us how we can grow spiritually!  What is your next step of faith?