God of the Whale 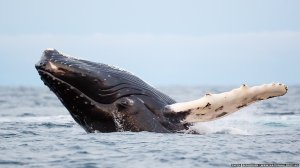 GOD OF THE WHALE

There is a wonderful hymn I love called God of the Sparrow God of the Whale.

This is the first verse lyrics

The other day I saw a video (see below) of a snorkeler who went into the water from his boat in the middle of the bay because there was a humpback whale that kept coming along side. It seemed in distress and would not leave. This whale was twice the length of the boat and weighed several tons. When the snorkeler got under the water he realized the whale was entangled in a fishing net.  The man   went to the surface and got a knife and he and the others began cutting away the net.   After a long while they were able free the great whale.  What was striking to me was that the whale could at any time taken a dive but it did not.  Had it, these men could have been put in great danger. This whale was focused on being free, rather than the fear.   These men were more focused on the rescue rather than the danger.   Amazingly, they were able to free the whale from the net.  Freed from certain death, the whale went away leaping and jumping out of the water in what seemed to be a show of gratitude and thanksgiving.

Many of us may have found ourselves strangling from entanglements of our own making or from outside sources.    But unlike the whale we just live with it hoping it will go away.  We are unable to live up to our greatest potential and are unable to live life to the fullest.   Maybe the whale had been entangled for months.  Maybe the whale at first tried to just live with it but when it realized his very nature to jump out of the water was now compromised he had to find a way to get free.    Like the whale we may need help that can only come from beyond our world, beyond our ability to remove the very thing that is harming us.   Like the whale, we have to put ourselves in a place where we can receive help.  These men did what no other whale could do. They had the means to remove the entanglement.    And when the whale was free it responded in the only way it could.

God knows how to untangle us but we have to get to the place where our need to be free is greater than our fears, greater than compromise.  Our desire to be all we are created to be is greater than thinking I deserve to live with this entanglement because after all it is my fault I am entangled.   God loves you so much and is so willing to help you get free but like the whale you will have to trust.   I can testify that I know what it is like to get untangled and set free to leap and joy and live without entanglements that held me back. God love you and has an abundance of compassion the same compassion those men on the boat had for the whale.  But we must be like the whale and go to the place where God can help.

2 Peter 3:9The Message (MSG)Don’t overlook the obvious here, friends. With God, one day is as good as a thousand years, a thousand years as a day. God isn’t late with his promise as some measure lateness. He is restraining himself on account of you, holding back the End because he doesn’t want anyone lost. He’s giving everyone space and time to change.

God is waiting to help you.     If you resonate with this story, email me.  I would like to walk with you and show you the way to freedom.  pastordonnaprucc@gmail.com